Day 1 on Lesvos. We arrived on Lesvos last night, around 8 30 pm, it was dark and cold. Our route was Dublin > LHR > Athens > Mytilene. Our flight to Mytilene was full, a small prop plane carrying an eclectic mix of passengers including locals and international volunteers.

As we couldn’t source a single Greek SIM card in Athens we were solely dependent on a saved google map directing us to our destination – Molyvos. We drove from the airport into Mytilene, which requires some serious concentration when you are unfamiliar with the layout, the very narrow streets and the one way systems. We quickly found ourselves on a secondary rural road up to the north of the island. The road climbs steeply at points, winding sharply and there were a few intakes of breath as we were perilously close to the edge of the road, beyond which was only darkness. After what seemed an age but was in reality closer to 90 minutes we arrived in Molyvos – welcomed by the glowing castle which sits proudly on top of the town.

What struck us straight away was how quiet it was, despite being a weekday, there was not a person to be found, even our hostel was deserted – we eventually managed to track down the owner to let us to our rooms. Eager to get started straight away we packed up our kit and walked through the town in search of the Starfish Foundation Headquarters, based out of the Captains Table restaurant. There has been much documented about the great work Starfish volunteers are doing, but last night the harbour was still and calm, with no evidence of what had been.

We arrived at the Captains Table to what can only be described as a depressed, underwhelming reception. We chatted with one of the volunteers for a while, who was seated outside along with a crew of others. Looking exhausted (on account of having completed a night shift) she told us there was little happening on the north of the island, a handful of boats landing a day and that the landing patterns had changed on account of the smugglers trying to avoid the increased activity of the Turkish coastguard since the €3b contribution last week. Refugees were now arriving at different parts of the island, primarily around the Lighthouse East, Skala and Mytilene as far down as the airport.

So faced with the fact that we only have a few precious days here and keeping in mind our objective is to understand and document the situation we decided to abandon our idea of staying in Molyvos.Whilst volunteers are still required there to assist with other functions like beach cleaning / supply sorting we knew that type of footage was not going to motivate our future benefactors at home to donate. We agreed to head south first thing in the morning.

After a fraught sleepless night, we took to the road, made an immediate wrong turn (on account of my dreadful navigation skills) and traversed our way through streets better suited to a moped than a car. Momentarily distracted by the sheer volume of cats (they are everywhere), the beautiful cobbled lanes and the occasional dressed donkey we eventually found ourselves back on track. With the intention of heading to Eftalou beach to talk to locals Phillipa & Eric Kempson we came across the first evidence of what had been occurring on the island. One after another abandoned and wrecked boats lined the shore, some with damaged hulls, some part submerged. Lorries navigated the ridiculously perilous roads, overladen with wrecks, each dripping with life vests. 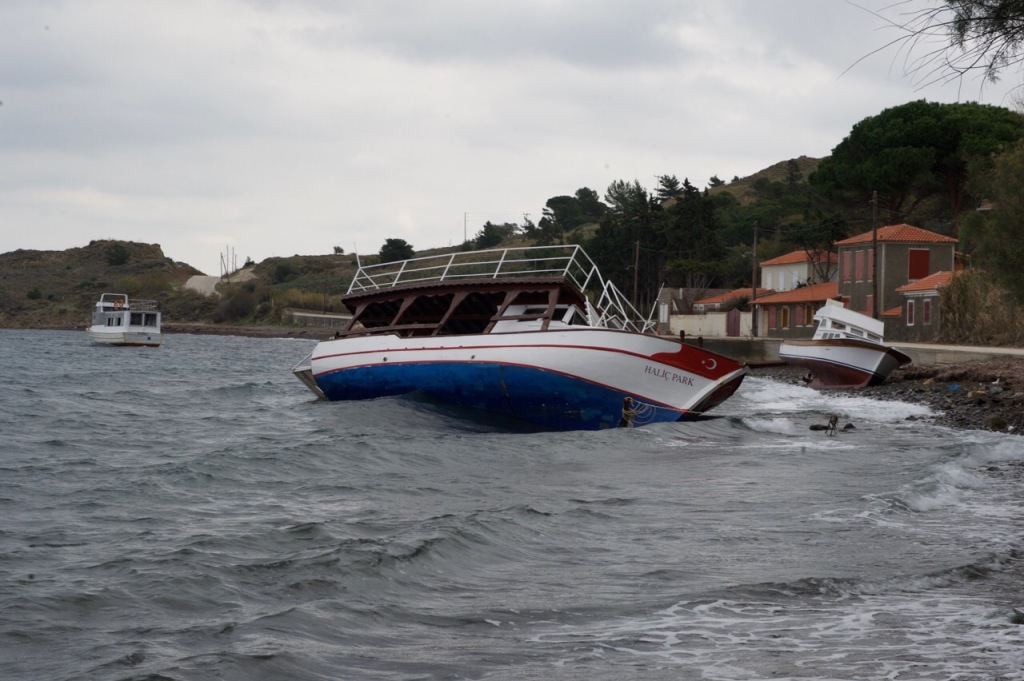 Further along the road we found a make shift MSF medical base, simply a tent on the beach, with a doctor and two paramedics. Despite the language barrier we managed to make out that they wait there for the refugees who were rescued further up the shore to be bought down to them for medical attention. On the other side of the road within an existing building was another medical response unit. 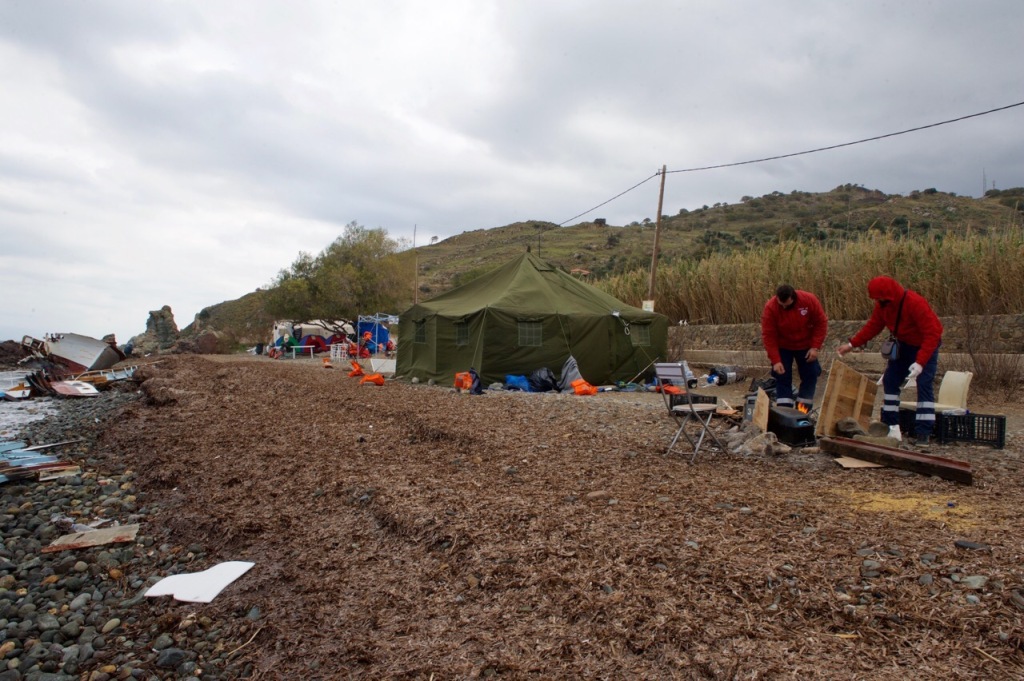 While I was introducing myself to the volunteer on duty who had limited English I realised that there was a shuffling noise behind me. I had not noticed that a man, recently recovered from the sea and wrapped in a gold emergency blanket was standing quietly to the side, dripping wet and in evident distress. I do not know whether it was the fact that he was in shock or a a result of him being so painfully thin that made him almost invisible. I turned to him and he started talking rapidly – I have no idea where he ordinated from or the language he spoke and I felt helpless in the fact that I had no means with which to aid him. I asked the volunteer how can I help, how can I assist you to help this man. He shrugged and said “its ok, I’m calling the doctor – he has a dislocated shoulder”. I turned to the man, who was still standing, with his now obviously distorted shoulder, trying to get his wet socks off and I said I’m sorry. He looked at me and said “Sorry, sorry sorry” like he was causing me a problem – I walked away. We didn’t take a photo of this man out of respect, yet when I reflected on it later I could have simply crouched down and helped him with his socks. 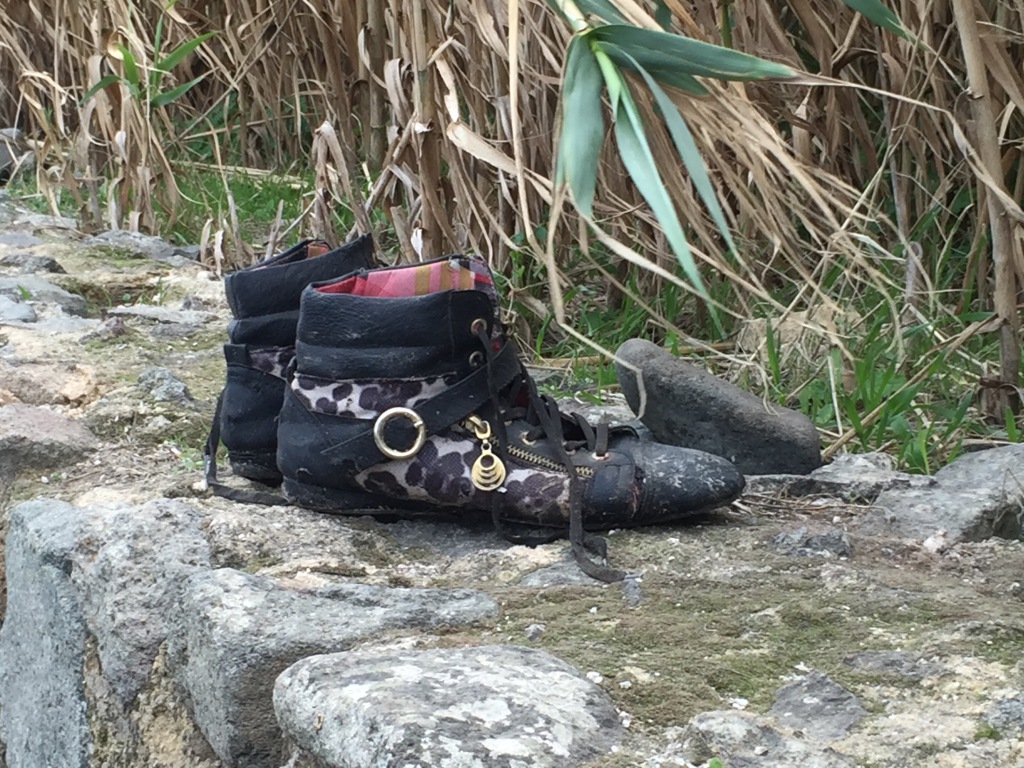