When I departed for Lesvos I was pretty certain that I  would be reporting on the same dramatic events that I had seen in the media in the preceding months. Apart from the initial global outrage when the body of three year old Aylan Kurdi washed up on the shores of Kos, I had to go digging around on social media to find out what was happening. Despite the hundreds of volunteers on the island, few of them are managing to consistently document what they see. Many of them are so exhausted and traumatised by what they have experienced I can’t blame them for wanting to bury it.

There is a touch of an “anti media” vibe on the island, apparently when inducted, volunteers are being asked to keep the media out. Some NGOs and local volunteer groups understand the power of media for fundraising purposes – and I am with them 100%. Having returned to Ireland I am stunned how shocked people are when I tell them what I saw. So whilst respect and dignity for refugees is of paramount importance I make no apology for reporting the truth. Many of the rescues at sea have been sensationalised, which is not a bad thing as it has drawn people like me to the island. However the deadly sea crossings are just one small part of the journey. What I discovered when I was there was that there are many unsung heroes operating quietly and steadfastly, and boy are they making a difference.

One such team is Disaster Tech Lab (“DTL”), a little charitable trust based in the West of Ireland, founded and managed by a Dutchman, Evert Bopp. Bopp also runs Disaster Medics (more about them later). It hadn’t occurred to me how important internet access and communication services were for disaster response management and to enable separated refugee families remain connected.

Founded in 2010, DTL is headquartered in Ireland, with offices in Oklahoma (USA) and Melbourne (Australia) and 175 volunteers across 11 countries. Their past deployments include installing communications services following the Haiti earthquake, Hurricane Sandy and various other natural disaster locations.

We caught up with two of their volunteers on Lesvos, Nicholas and Miguel, who were busy working in the Camp at Kara Tepe. Kara Tepe overlooks the sea and is built on an old abandoned driving school site. The infrastructure is pretty robust, there are flat pack shelters and NGOs on site looking after food distribution and providing medical services. 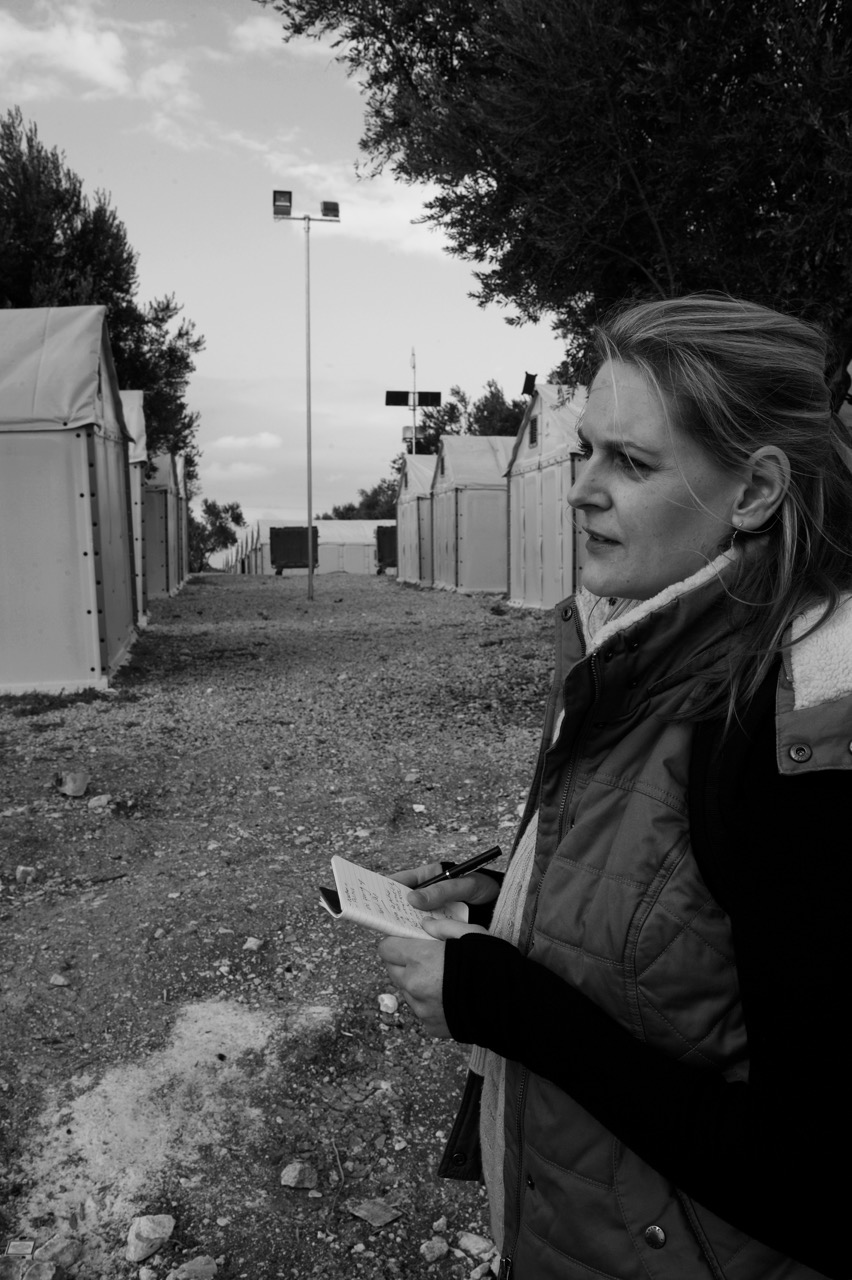 The guys were cabling when we arrived, they have installed wifi which is powered by the solar panels you can see in the picture above. The wifi networks, one for volunteers and one for refugees  are managed by a volunteer in Canada. The time zone difference makes network management and problem resolution an issue, as does the weather. 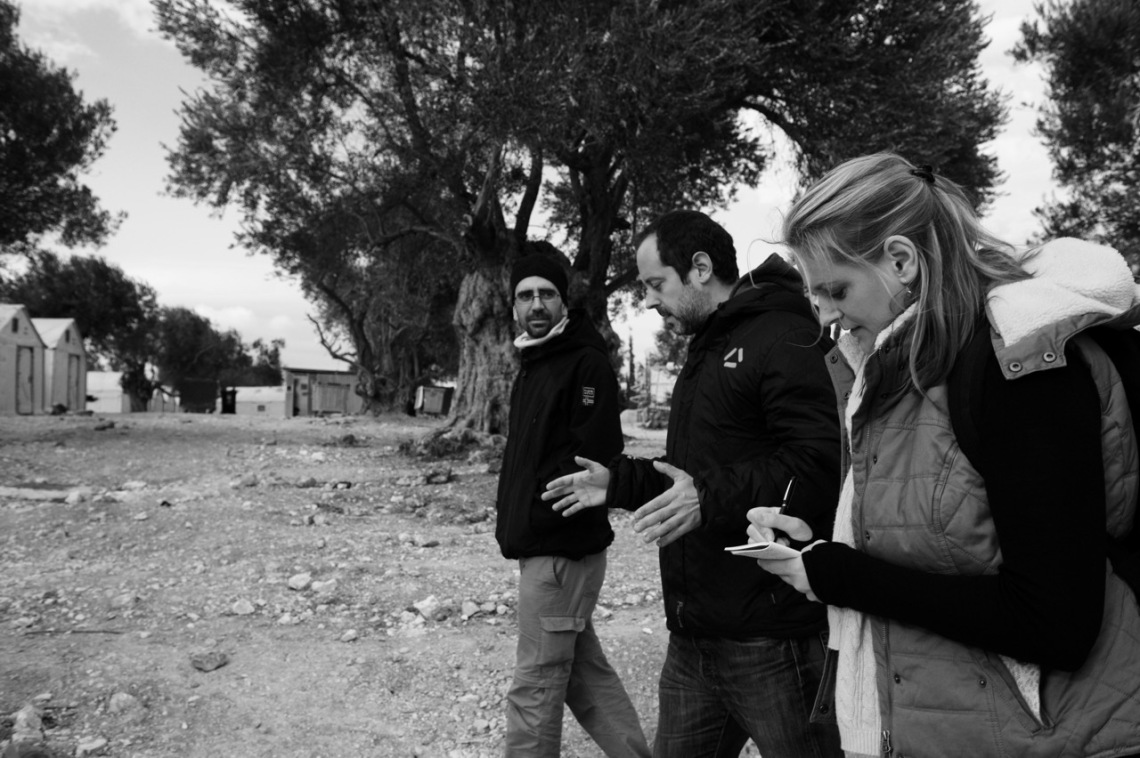 From left to right, Miguel (volunteer from Southampton), Nicholas (local volunteer), and me (furiously taking notes!).

The guys explained that much of the equipment they have installed has been donated, with great support from Cambrium Networks. Getting the equipment in quickly to be able to provide immediate infrastructure is a problem, which in part can be overcome by having a local volunteer who can navigate their way around the local bureaucracy which can be an impediment to prompt execution.

We asked them what they need to make a material difference and a couple of things jumped out at us.

It was evident how valuable having a local volunteer was – in this image below equipment had been installed on an elevated point overlooking Mytilene. The water tank was on private land and access to same would be a privilege not extended to NGOs. 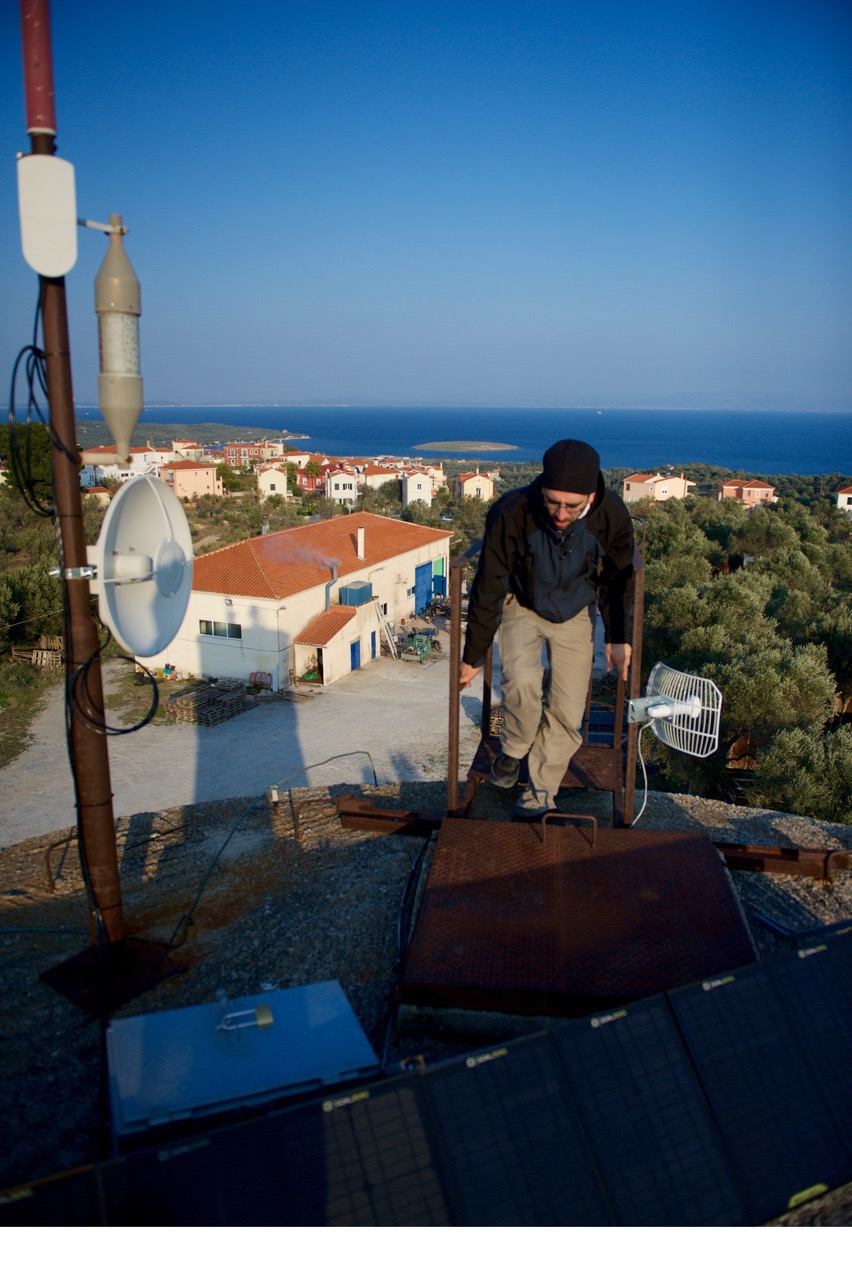 Miguel scaling the water tower (head for heights a prerequisite in this job!) 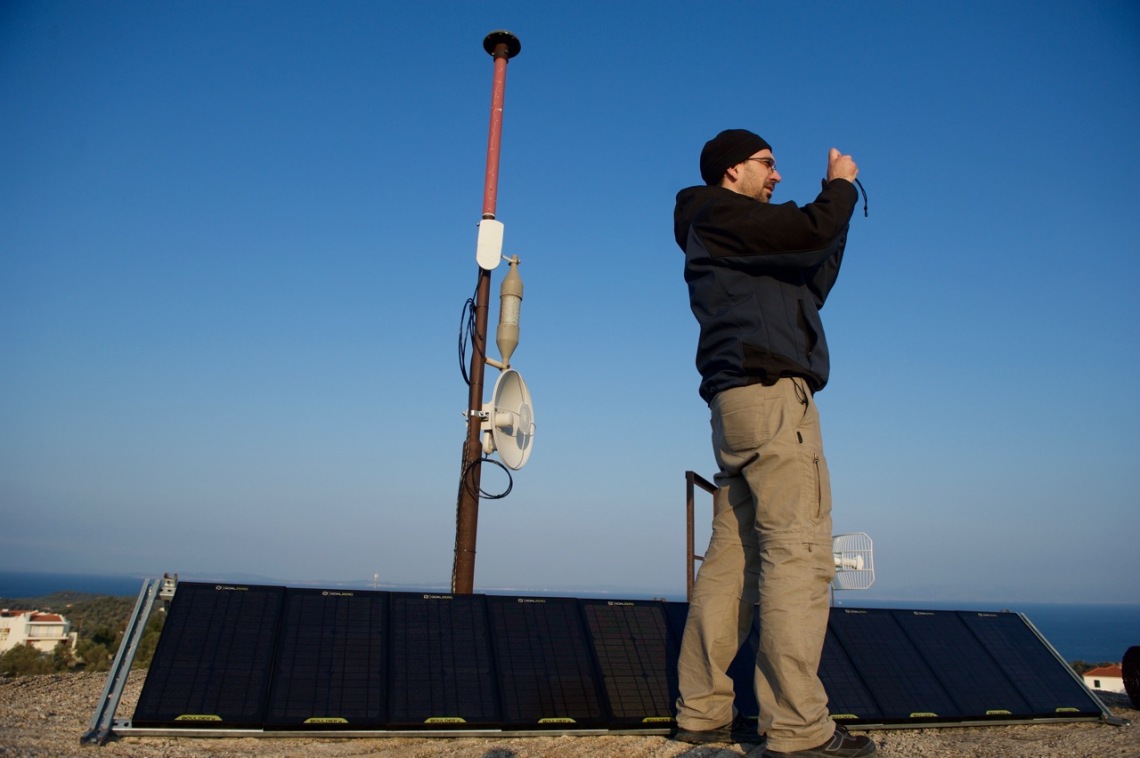 DTL want to expand their infrastructure to the north of the island, but coordination with the telecoms companies is another hurdle ahead. Interestingly Vodafone did a recon to the island, with a view to installing mobile 3G. Apparently they had a look around and promptly left again.  So hats off to the tenacity of DTL and their volunteers. They have my utmost respect  – they are truly the unsung heroes.

Today Refugee Watch has committed an initial €700 contribution towards the cost of supplies used by DTL on Lesvos. We hope to be working closely with DTL  over the coming months to bring about lasting and meaningful communication networks on Lesvos.