Dawn breaks on the outskirts of Calais, France. A steady stream of men meander along a road towards the camp they call home. Dark figures, heads shrouded in hoodies, shoulders slumped, eyes heavy. Hearts even heavier. With their backs to us, they barely offer an upward glance as we drive past, onwards into the camp known as the Jungle. To some their presence would cause alarm, they are numerous and they travel in packs. Being in a pack they have learned, provides some protection against their current foe. This is a new enemy – young white fascists who dress in black and mimic the appearance of the gendarme, right down to the black batons they carry, which are in fact iron bars. These young French men wear their prejudice proudly as they patrol the streets, such is their intolerance of the towns unwanted guests.

Sunrise in the Jungle is frequently accompanied by the disbursement of tear gas. As we join the motorway which flies over the edge of the camp, the road in to the port is covered in debris, a deliberate attempt by some of the men to bring the early morning traffic to a halt. It is hard to tell whether they believe they will successfully on board a vehicle and achieve their goal of illegally entering the UK or whether they just fancy making a bit of trouble. They jump the barrier and scurry back across the field towards the camp. Behind them three flares of tear gas curve through the early morning sky – a display of the gendarme’s annoyance at this repetitive game that is played every morning. 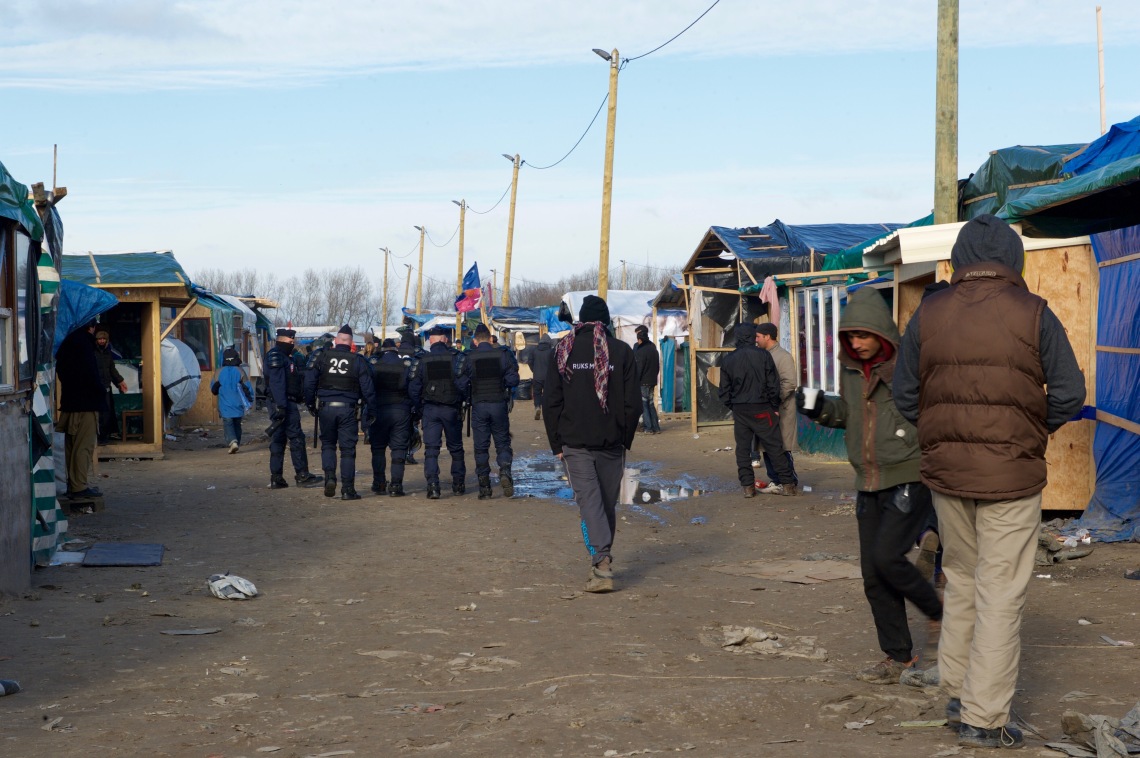 The Jungle is an illegal refugee camp, not officially recognised by the French authorities. There is no NGO presence and the residents have established disparate communities divided by their ethnicity. Shelter comes in the form of tent, hut or for a privileged few, a caravan. Shanty shops and restaurants line the informal streets and despite a destructive demolition by the authorities a few months ago the land area that the camp occupies is vast. Acres of waste ground is littered with refuse, sand, a few struggling poppy flowers and the occasional garden planted by someone reminiscing about another place. Here, cats live in fear of the rats, who are giant and plentiful. 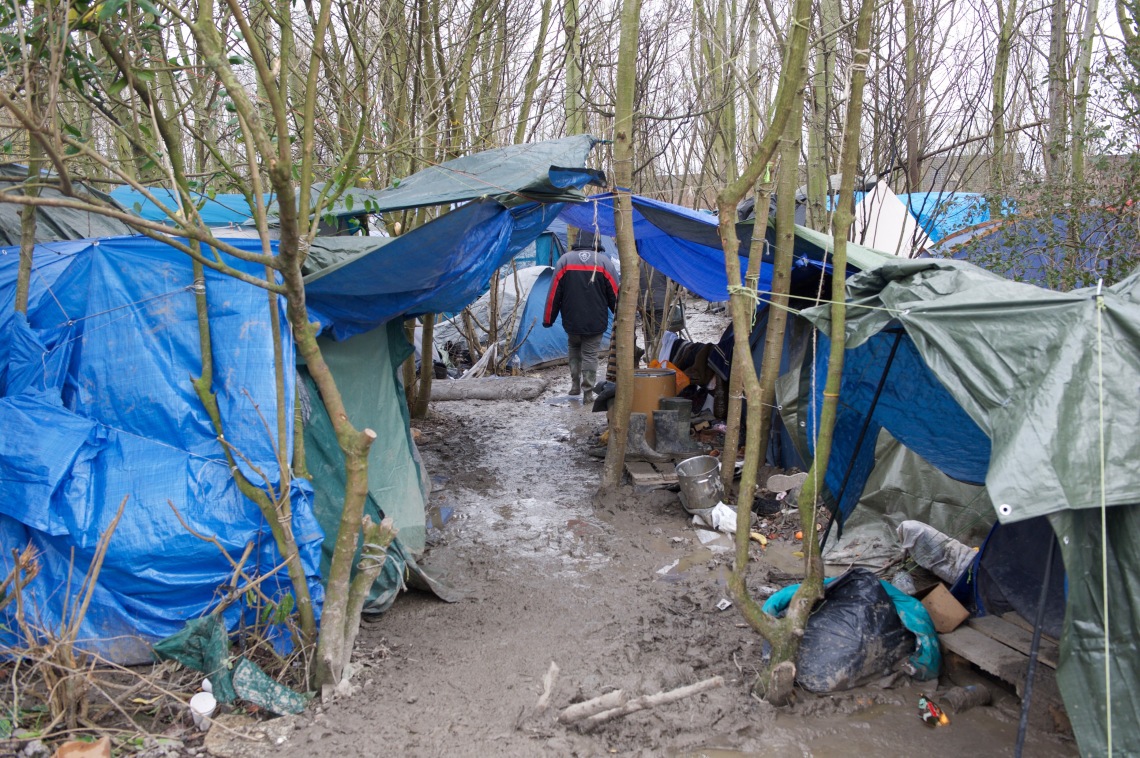 There is a strong cohort of female volunteers, a curious situation given the lack of women and children here. Some are here as members of coordinated grass roots volunteering movements, their tenure short. They are cooking, cleaning, distributing aid, teaching and listening. Outreach is like an invisible IV drip, slowly steadily providing emotional support to those that need it. For the 5,000 or so residents here there are simply not enough volunteer ears to go round. There are also long term volunteers, for whom the camp and its inhabitants have become their homes and families.

Many of these women though are faultless in their campaign to identify, register and protect the unaccompanied minors in the camp. Many of these boys have suffered a rude initiation into manhood and no longer consider themselves children. We met two boys who made a 6,000 km journey, from Pakistan to Calais over a period of four months. They are just 16 years old. They have lived their entire lives as refugees and haven’t been to school for six years. What follows is a transcribed extract from a recorded interview with them from earlier this year, 6 weeks after their arrival in the camp. 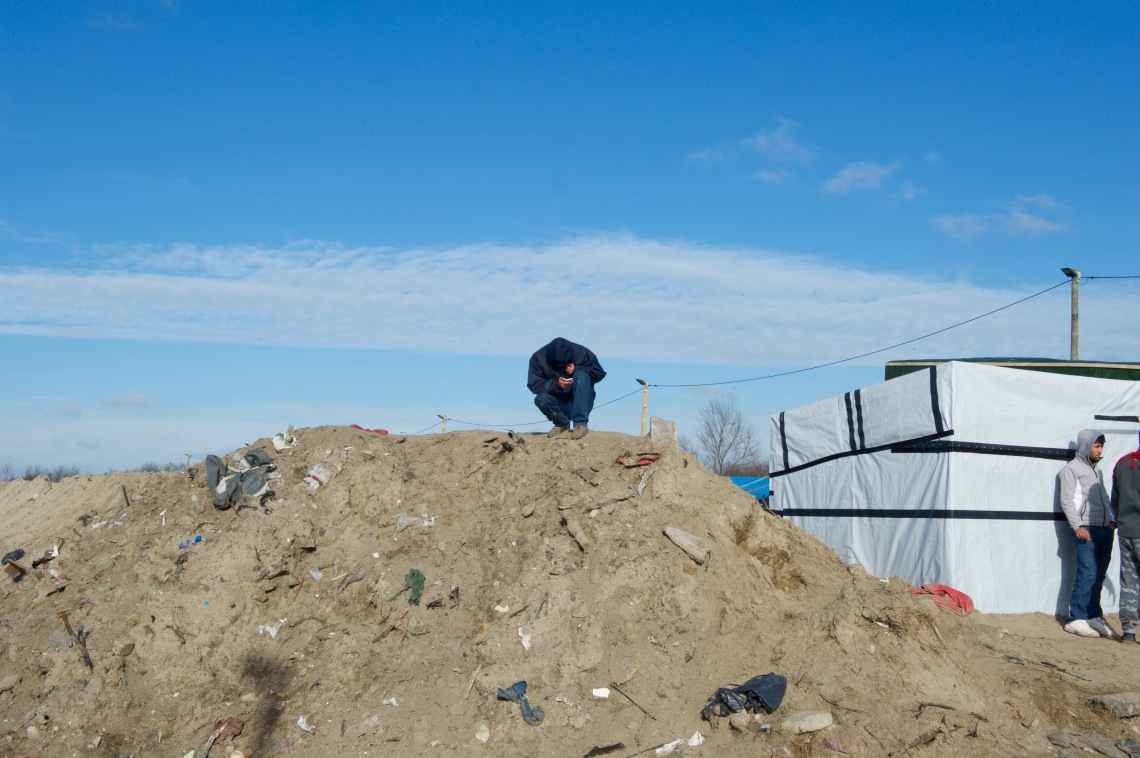 S: First we left our country (Afghanistan) and we went to Pakistan. My father’s brother was killed and my father ran away to Pakistan.

BR: Was it the Taliban?

S: Yes, they left no one. They give no chance to no one. If they catch us they will kill us.

BR: How long are you in the Jungle?

S: One and a half month.

BR: What way did you leave?

S: I remember Pakistan to Iran. They put us in a container type. They put all the childrens in containers and we don’t see the outside. One and a half weeks it takes to reach Iran from Pakistan. They sold us and put us in the containers, for two to three hours. Then we got out and for 12 or 13 hours walked down the mountains into Iran.

BR: Was it all children?

S: The men and children were separated. I think there was one woman with children with us.

BR: Did you have any family members with you?

BR: Did you have food?

BR: Was there light in the containers?

BR: No Candles or anything, completely dark?

S: No, Nothing. For five or six hours we are in containers. Then they tell us to get out. Then I can see but I do not know the place we are.

BR: Was it smugglers who transported you?

S: I think smugglers, I do not know them.

BR: Who set it up for you? Was it your family that arranged for you to get out?

S: Yes my mother. We had to leave because in my country we have a religion problem you know. First if they catch us they will cut us. Cut us and ask for money, if they don’t get the money they will definitely kill us. My mother said we had to leave before they kill us.

S: Four months before, from Pakistan.

BR: Is it just men that are in danger, not women and girls?

S: Everyone if they are Shia. Shia and Sunni they are fighting each other. The Shia are less in number. If they catch us they will kill us. Me and him (gesturing to his cousin) we were playing in our street, playing pool and bomb blast is happening. He is saying, something has happened near, let’s go and see. I told him he should not go there, that I am scared. Flames are going up, I tell him we are leaving. He says ok let’s go. When we are going there was another blast. 92 people were killed. My mother then said we had to go. My mother, she didn’t have enough money to send us so she borrowed it…

(It is assumed that this was one of the blasts reported to have killed 115 people in total, 81 of whom died following twin blasts by a Sunni suicide bomber and a subsequent car bomber in a packed Shia occupied billiards hall in Quetta, January 2013.)

…When we reached Istanbul, we went in a car, then we reached the place to cross and we pumped a rubber tube. They said take it and drop it in the water. Four and a half hours we are on the water. We reached Greece, I don’t know where, there were people there, they were sitting waiting, they burned a fire and they gave us food. There was water in the boat and they helped us. The people there are telling us, go here and go there. They said we could get heat cutters to get through the police cages in Macedonia.

BR: Where was the most difficult place?

S: All. We don’t have food for much of the time. We have nothing. After 24 hours they might give us something (referring to the smugglers). We get one or two apples.

BR: And your final destination is the UK?

S: I expect the UK will accept us. My whole life has been as a refugee, we don’t have a home, and we have nothing.

BR: Why do you think the UK will help you?

S: They have power and they can protect us and we have nothing. If we go back they will definitely kill us. Definitely they will kill us. We do not have any other option.

BR: What did you expect of the Jungle in Calais? Is it worse, better?

S: It is good now, because my life is safe here. I am happy because my life is safe. I will go to the UK and I will tell them to call my mother. My father in 2013, was also lost in a bomb blast. I cannot meet my father again. This is why I have run away. They never let anyone live. They make a boundary (in Pakistan) and if you go out of the boundary they will kill us. Inside the boundary we have nothing. If we need clothes, food we have to go outside the boundary. And that is when they will kill us. We go we cover our faces, with scarves.

BR: How is life in the Jungle? You have a caravan now…

S: It is very hard to live in the Jungle. We have nothing inside. We wake in the morning and stand in a big line for one hour and maybe our time will come for a bit of food, butter, cheese.

BR: What are the things you need most?

S: I need a home. Going to school. The UK government are able to do that.

BR: Have you spoken to your mother since you started your journey?

BR: What would make life a small bit easier for you know?

S: Clothes is good, they give us clothes. We don’t have fire, food to cook ourselves. I have a cooker but I have no gas. I have no money for gas. It is €2 for gas. I do not have. When we arrived we couldn’t sleep for three days. We had nowhere to sleep. We arrived at 3(pm) at night. We don’t know where we should go.

BR: Do you feel safe in the Jungle?

S: No if they get us in the night, they will beat us. Before it is getting night we will stay in the caravan until morning. First the police were very kind to us. Now they don’t know it is not us throwing stones, it is the smugglers. Smugglers are beating the ones who drive the cars (meaning other people assisting refugees cross to the UK, not for profit) and throwing stones. They do this (the smugglers) they are losing money if people go in a car. It is costing £7,000 to £8,000. We don’t even have €5. 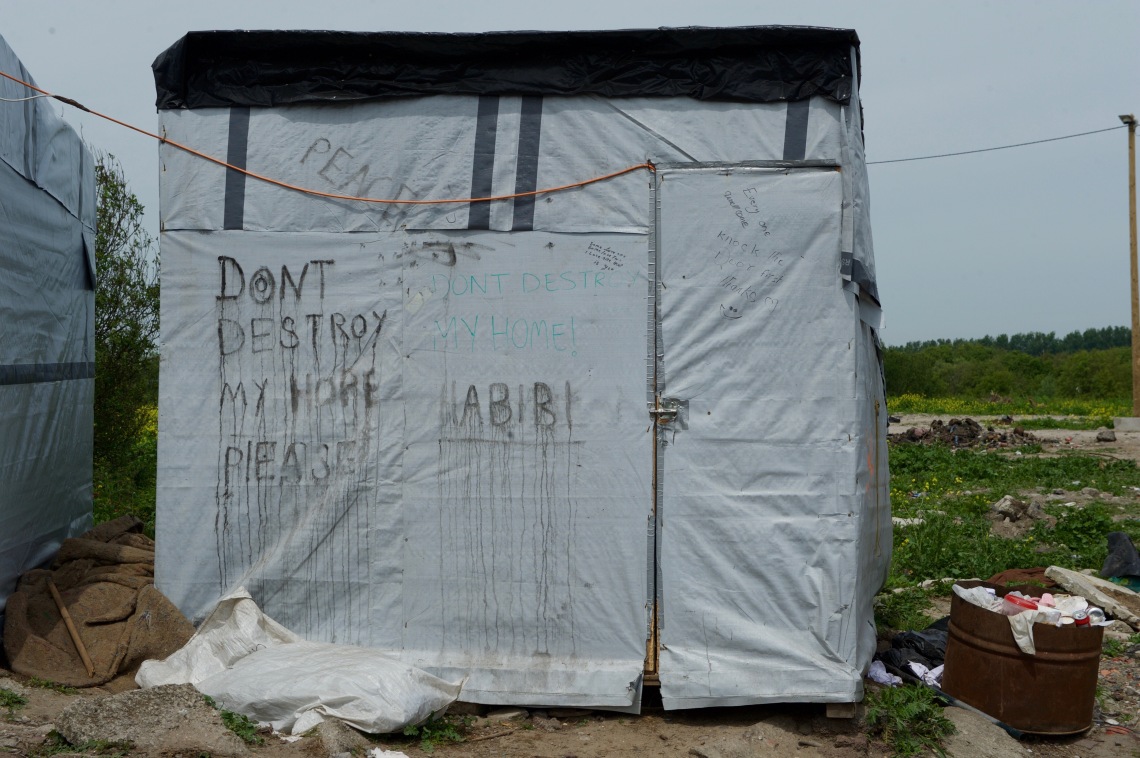 S and his cousin have been stranded in the Jungle for six months now. They have three options, claim asylum in France, risk their lives and continue attempting to cross illegally or somehow raise the money to be smuggled. Accessing smugglers is easy. They are easily identifiable in the camp, well groomed, clean clothes and flashy watches. They are a reportedly making upwards of £32,000 per week for successful crossings. They are no more than a facilitator, the risk taking is shouldered by others, who undoubtedly get a small cut of the takings. Their network of contacts must include freight and border control, such is the number of people crossing every week. It would be impossible for them to achieve that level of success in isolation.

For the young men in the camp, for whom the smugglers financial hurdle is too high they place their lives on the line every single night, chasing trucks and trains. In addition to the reported fatalities arising from attempted crossings, many more suffer extreme injury. Not to mention their broken spirit.

As night falls and we leave the camp, a solitary figure skulks along the railway tracks, silhouetted by moon light. He is on route to cross. Despite the danger, he may be better off on his own. This man is someone’s son, brother, husband, father. His tenacity to secure a better life for his family is admirable, courageous and tragic. I hope he makes it. 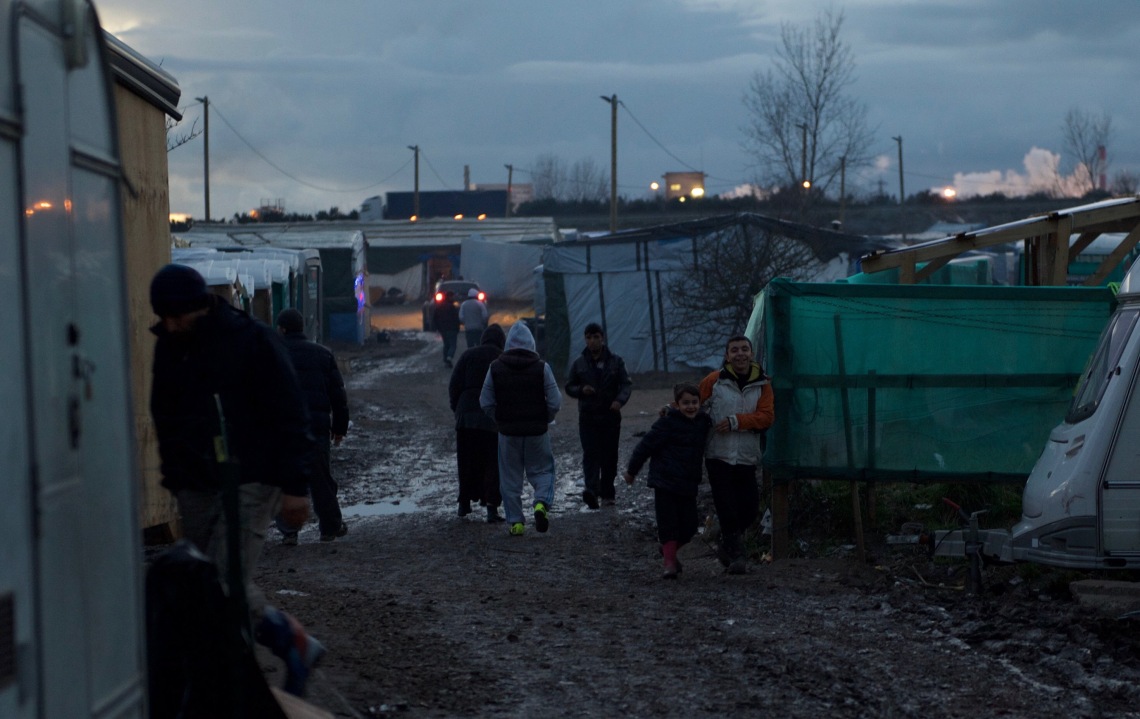